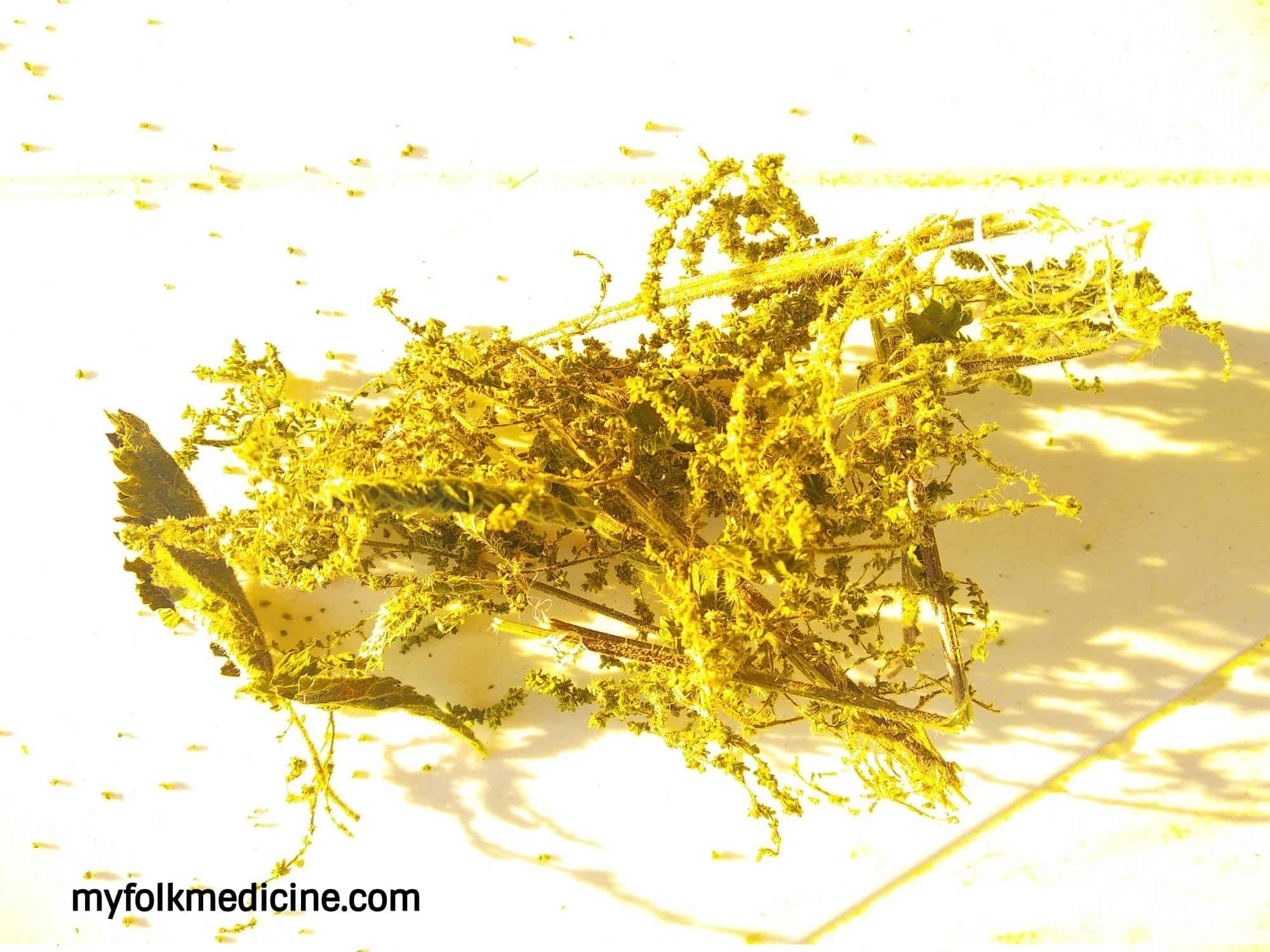 After we have clarified what the nettle is and how it works, it is now time to reflect on its benefits to human health.

Nettle is not consumed fresh orally. This is because the chemicals that it contains can be harmful. It’s commonly used in the form of tea, tincture, juice, and syrup. You can read about how to use nettle and useful recipes in my next blog.

In folk medicine, it has had many uses. It was used to treat arthritis, back pain, anemia because it contains a lot of iron, warm-up, and more.

Here, I will list all the benefits that are proven by scientific studies.

Common Nettle is Rich in Nutrients and Antioxidants

This herb contains large amounts of nutrients. Some of them act as antioxidants in the human body. These are vital for maintaining human health.

And why is that so? Antioxidants play a major role in protecting cells from free radicals that can harm them. Protected and healthy cells mean protection against cancer, aging, blood sugar, heart disease, and more.

Nettle abounds with the following nutrients:

Studies of how nettle extract affects cancer and type 2 diabetes have shown that nettle actually increases the antioxidants in the blood.

Can be Used for Treatment of Enlarged Prostate Gland

Discomfort during urination is caused by an enlarged prostate. This condition is called benign prostatic hyperplasia (BPH). About 50% of men over the age of 51 have this disease.

Studies on this topic have shown that nettle extract reduces prostate size. In fact, this extract prevents the conversion of testosterone to dihydrotestosterone which is a more powerful form of testosterone.

Studies on humans have shown that this herb can be used for short-term and long-term treatment without side effects.

Nettle can also be used for other urinary problems. But it has not yet been proven whether it has the same effects as pharmaceutical therapy.

Even in traditional medicine, nettle is used to lower blood pressure. Today, there are scientific studies that confirm the same.

High blood pressure, if left untreated, can cause stroke and other heart diseases.

Previous studies have shown how nettle acts in the body. It does 3 things to reduce blood pressure:

These are limited scientific studies. Further investigation is needed to prove with certainty whether the nettle lowers blood pressure.

Reduces Inflammation and Helps With Arthritis.

Inflammation is the human body’s defense mechanism against infections. But, if the inflammation becomes chronic, it can lead to more diseases. Arthritis is one of the most common diseases that result from inflammation.

Nettle contains components that can reduce inflammation. Here is what studies show after observing this process:

Further research is needed on this topic though. Do not abandon standard therapy until the true effect of the nettle is proven.

How does a Traditional Iranian drink also called “aragh gazaneh” work on Blood Sugar? It was the subject of a study that wanted to research the effect of nettle on blood sugar.

Common Nettle as antidiabetic herbal medicine was subject to а study that used nettle leaf extract. It was performed on insulin resistant rats.

The extract has been shown to be effective in blood glucose and insulin levels this time too.

There are other studies showing that nettle really helps with type 2 diabetes. It actually works in a way that mimics insulin.

However, much more study is needed here as well.

May Reduce the Symptoms of Seasonal Allergies

Nettle has a positive effect on hay fever and allergies. This is the result of a study that showed that nettle extract reduces the inflammatory processes which cause these allergies.

Respondents with allergic rhinitis received dried nettle for a period of one week. After that period, they reported feeling better than the placebo group.

In the last study, respondents took nettle root extract for one month.

At the end of the study, the results showed that this herb has positive benefits for people suffering from allergic rhinitis.

These are limited studies, and it is necessary to study this subject in more detail.

Only partial research has been done on these benefits. They show a positive result, but further investigations are needed to prove this effect.

You should not consume this herb fresh. As I said in my previous blog, it contains hairs that release chemicals. The fresh herb contains these chemicals though. (here you can also read about how to treat stinging nettle rash)

It is generally safe to use dried, cooked, such as tea, syrup, etc.

You should only pay attention to allergies, i.e. if you are allergic. If that’s the case, you shouldn’t use it. If you start to feel choking, redness, loss of consciousness, and nausea immediately see a doctor.

The second thing to look out for is the interaction with other drugs. If you use blood pressure medications, diuretics, blood thinners, Lithium, and diabetes medication, consult your doctor before you start using it. Nettle works the same as these medications, so it can impair their effectiveness.

Avoid using it during pregnancy. It can cause contractions and miscarriage.

A Word From Me

The nettle is not eaten fresh but dried, cooked, in creams, syrups, etc.

It has many benefits for human health as it reduces inflammation, blood pressure, helps heal wounds, and allergies.

It is rich in many nutrients and antioxidants such as magnesium, calcium, vitamin C, A, K and iron.

In folk medicine, it is used for anemia due to the large amount of iron it contains.

You can read about recipes and how to prepare it as a traditional medicine in my next blog.