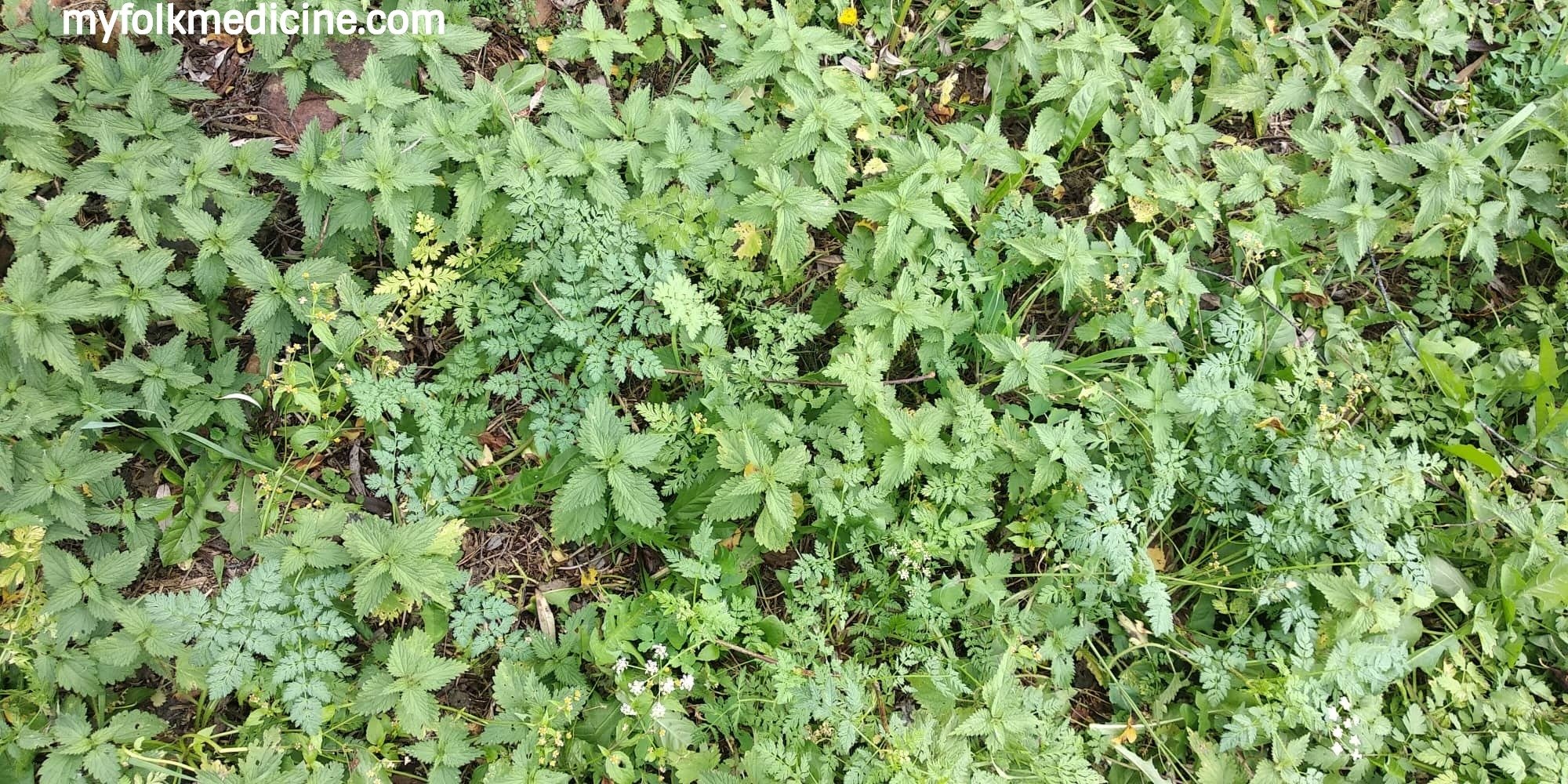 I wonder if the nettle did not cause inflammation at the touch, would it be so recognizable worldwide? It is not very noticeable at first glance, it looks like some sort of ordinary leaf.

In fact, this plant is not a bit simple and ordinary. Touch stinging is a defense mechanism against herbivorous animals. A mechanism that evaluates and works flawlessly.

I decided to devote this blog to how the nettle system works because I found it interesting. Also, I want to give you information on how to treat the sting.

From the nutritional aspect, it contains iron, magnesium, calcium, vitamin A, vitamin C, and protein. It is not consumed fresh but in the form of syrup, tea, spice, tincture, and more, about which I will describe in my next blog.

But first, let’s start from the beginning.

What is Stinging Nettle or Common Nettle?

The Latin name for this plant is Urtica dioica, which the people also call it common nettle or stinging nettle.

It grows in the countryside in moist soil. In summer, it reaches a height of up to 2 meters, and in winter it descends low to the ground.

It has green leaves that are 3-15 cm in size, yellow root, and green stem. The flowers are very small and can be green, white or brown. There is a male and female gender in this herb.

The trunk and leaves on the inside are covered in hairs. When they come into contact with a herbivorous animal, these fibers turn into needles. Then, they release chemicals that cause the victim’s inflammation and burning sensation.

The hairs that the plant covers are called trichomes. These trichomes represent elongated cells at the top of a multicellular substrate.

They are very fragile and hollow, turning into mini needles upon contact. These needles attach to the “attacker’s” tissue. And, they release fluid with chemicals that cause discomfort and inflammation.

The chemical composition of these “weapons” is not yet fully known to scientists. Past studies have shown that this fluid contains a mixture of serotonin, histamines, acetylcholine, and formic acid.

So, all this is a protective mechanism against herbivorous animals, but not all. For the invertebrates, this defense system is not activated. The hairs do not turn into harmful needles when they come to touch the plant.

Why is that so? The nettle evaluates with perfection. Small invertebrates cannot harm it. This protective mechanism only activates for large herbivores who can devour it.

There’s another interesting information about the evolution of this plant. Once damaged, the plant produces much more hairs than when it was not damaged.

Where there are damaged nettles, there are more herbivores. So, the nettles have more hairs in these situations than the nettles that face no danger. Hair making requires a lot more resources and if not needed, they are not wasted.

Female nettles not only spend more resources in seed production, but they also produce more hairs for protection.

How to Treat Stinging Nettle Rash?

The moment you touch a nettle by accident or on purpose, you become a victim and get attacked with small needles. What do you need to do?

Be careful with the following medications:

When Do You Have to See a Doctor?

If you already know that you are allergic to nettle or its sting, see a doctor immediately.

If you do not know and if after getting stung, you start to have symptoms like:

You must seek medical help immediately!

Note: In traditional medicine, for the treatment of nettle sting, people used dog leaves. They grow in the same places as nettle, and you can find them right away if you need them.

You can use it one way or another, and the sting is not that scary unless you have an allergy of course. Almost everyone in their life experiences its sting.

Nettles shouldn’t be harvested from June to October when they bloom. This is because during this time, the plant produces cystolith crystals. These crystals can disrupt the work of the urinary tract.

The leaves are used for cooking. Be careful to use gloves when harvesting.

A Word From Me

Nettle is one of the plants that have an excellent self-defense mechanism. Post-sting treatment is useful if you are not allergic to it. If you are allergic, you should see a doctor immediately.

This herb is rich in protein, iron, vitamin A, vitamin C, magnesium and calcium. Do not eat it fresh because needle chemicals can cause problems. It can be consumed like tea, cooked, in tincture or as a syrup.

The benefits, uses, and recipes follow in the next two blogs.

How to Pack and Store Medical Herbs?

Which Teas Are Good for Improving Digestion?