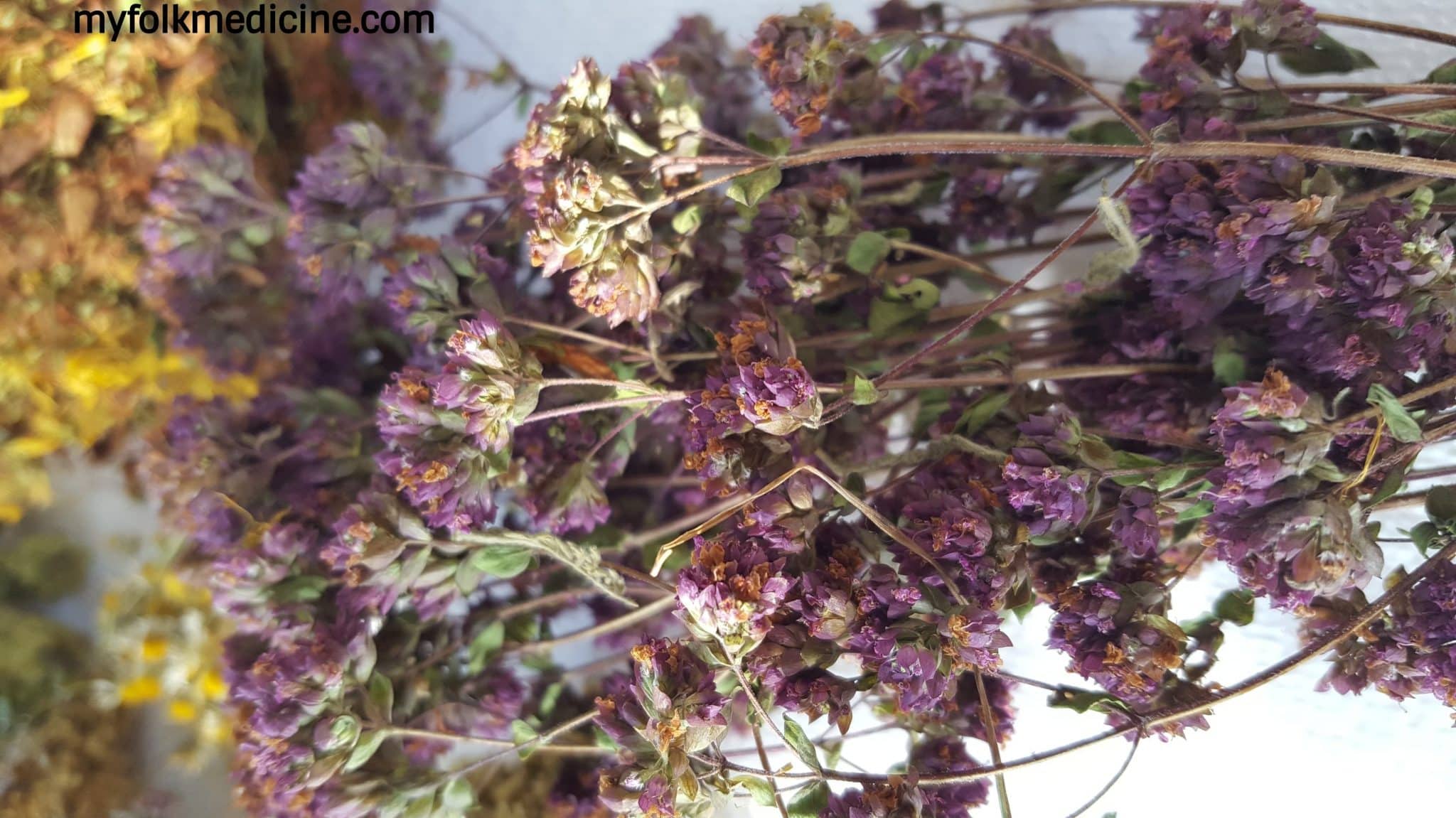 Purple flowers and leaves are used for making oregano tea. They are harvested at the time of flowering from July to October.

This herb has similar properties and appearance with thyme, but it grows larger. It consists of essential oils containing 50% thymol, which have been shown to have strong antibacterial and antioxidant properties.

In traditional medicine, this tea was one of the essentials for winter. It was used to treat digestive and respiratory organs.

Today, scientific studies show that oregano helps with these health problems. However, these are only initial studies that require further research into how it works.

Firstly, I would like to start with what the oregano herb is. Then, what its health benefits are and how to prepare it in a natural way. Lastly, I’ll cover the side effects from it.

It is a perennial herb that grows on dry, unprocessed soil. It loves the sun and occupies larger areas. Sometimes, it covers a whole meadow.

It grows to 20-50 cm high and has white to purple flowers. It tastes sweet to spicy.

Oregano is rich in vitamin K, antioxidants, phenolic, and flavonoids acids. Its essential oils contain thymol and carvacrol which have antiviral properties.

Oregano is rich in antioxidants. It also has anti-inflammatory and anti-bacterial activity. Drinking oregano tea for an extended period of time will help you in treating cough, sore throat, digestive system, cancer and more.

Let’s take a closer look at these benefits.

Benefits of the Antioxidants It Contains

Free radicals are substances that cause oxidative stress in the human body. This stress can lead to certain heart disease or cancer.

Antioxidants are needed to prevent these free radicals from damaging the cells. Fortunately, the oregano is rich in antioxidants shows this study.

Thymol and carvacrol the two main antioxidants that oregano contains. Combined with fruits and vegetables that are also rich in antioxidants, oregano can significantly reduce the free radicals in the body. Doing so will improve your overall health.

Inflammation is a normal reaction to an infection of the body. But, it can lead to many diseases such as diabetes, heart disease, autoimmune diseases and more.

Carvacrol also reduces inflammation, in fact, there is a study that has shown carvacrol to be an aid for swelling.

Thyme, along with oregano, also reduces inflammation of the colon and colitis in a study done on mice.

These studies have been done on animals. Further research is therefore needed.

In folk medicine, oregano tea is used especially for the treatment of cough in children. Today’s science confirms that such a connection really exists.

Oregano has antibacterial and antiviral properties that prevent the emergence of bacteria and viruses.

This is confirmed by a study that has shown oregano as quite effective in combating respiratory infections, especially in children.

Oregano has properties that prevent the growth and spread of organisms and bacteria. Oregano has so far been shown to be one of the most effective herbs against bacteria. More precisely, only the thyme is more effective than oregano as an antiseptic.

The application of oregano-containing cream significantly reduced the likelihood of postoperative wound infection. It is the result of the antibacterial properties of oregano that kill the bacteria.

And not only that, oregano in studies has been proven to be effective for 23 other bacteria.

These are just initial studies that need further research.

Oregano prevents viruses with the thymol and carvacrol contained in it.

Carvacrol is effective in fighting with murine norovirus which causes diarrhea, stomach pain, and nausea. This is the result of a study in which these diseases were reduced significantly with only one hour of treatment with carvacrol.

Also, these two components (thymol and carvacrol) were the subject of another study where they reduced herpes activity to 90% by just one hour.

Antioxidants in oregano play a major role in both the prevention and the fight against cancer. In fact, antioxidants not only reduce the damage caused by free radicals but also kill cancer cells. This is the subject of research in the following two studies.

Extract of oregano was consumed by people with cancer for the need of study. At the end of it, it was shown that the extract slowed down growth but also killed cancer cells.

The subject of research in the other study is carvacrol, which is also found in oregano. The study was about how it affects human colon cancer cells. The result was similar to the previous study. Cancer cells have decreased significantly.

These are only limited studies that require further research. You should not exclude standard therapy.

You can use the dried leaves you have at home as a spice to prepare this tea. But according to traditional medicine, the flowers are also used for this tea. That is, they are harvested during flowering.

A cup of tea requires a small spoonful of dried flowers and leaves of oregano.

Preheat the water to 80 ° C. Above this temperature, the herbs lose any useful ingredients.

Remove from heat, add tea, cover, and leave for 10-15 minutes. After that, drain and tea is ready.

Be careful not to put too much of the dried herbs in the water. Natural teas are much stronger than those in bags you can buy in the store. If you experience nausea after drinking it, reduce your dose.

Oregano has long been used in cooking as a spice. So far, it has shown no significant side effects. Drinking tea is safe if you drink 2-3 cups a day. More than that may lead to nausea.

How this tea works during pregnancy and lactation has not yet been researched.

The studies listed above have been done mostly on oregano extracts. Drinking tea will not have such a quick effect. To achieve the same results as the extract, it is necessary to consume it for a longer time. But, be careful not to overdo it.

Leaf and oregano flowers are used for making tea. It is similar in appearance to its thyme and has similar properties.

This herb is rich in antioxidants that prevent various diseases and improve overall human health.

It has a strong antibacterial and antiviral effect that is effective against cough and sores.
The antioxidants contained in oregano have been studied and have been shown to kill cancer cells.

There are no significant side effects from drinking it.

Which Teas Are Good for Improving Digestion?

Chamomile Tea Benefits and Side Effects