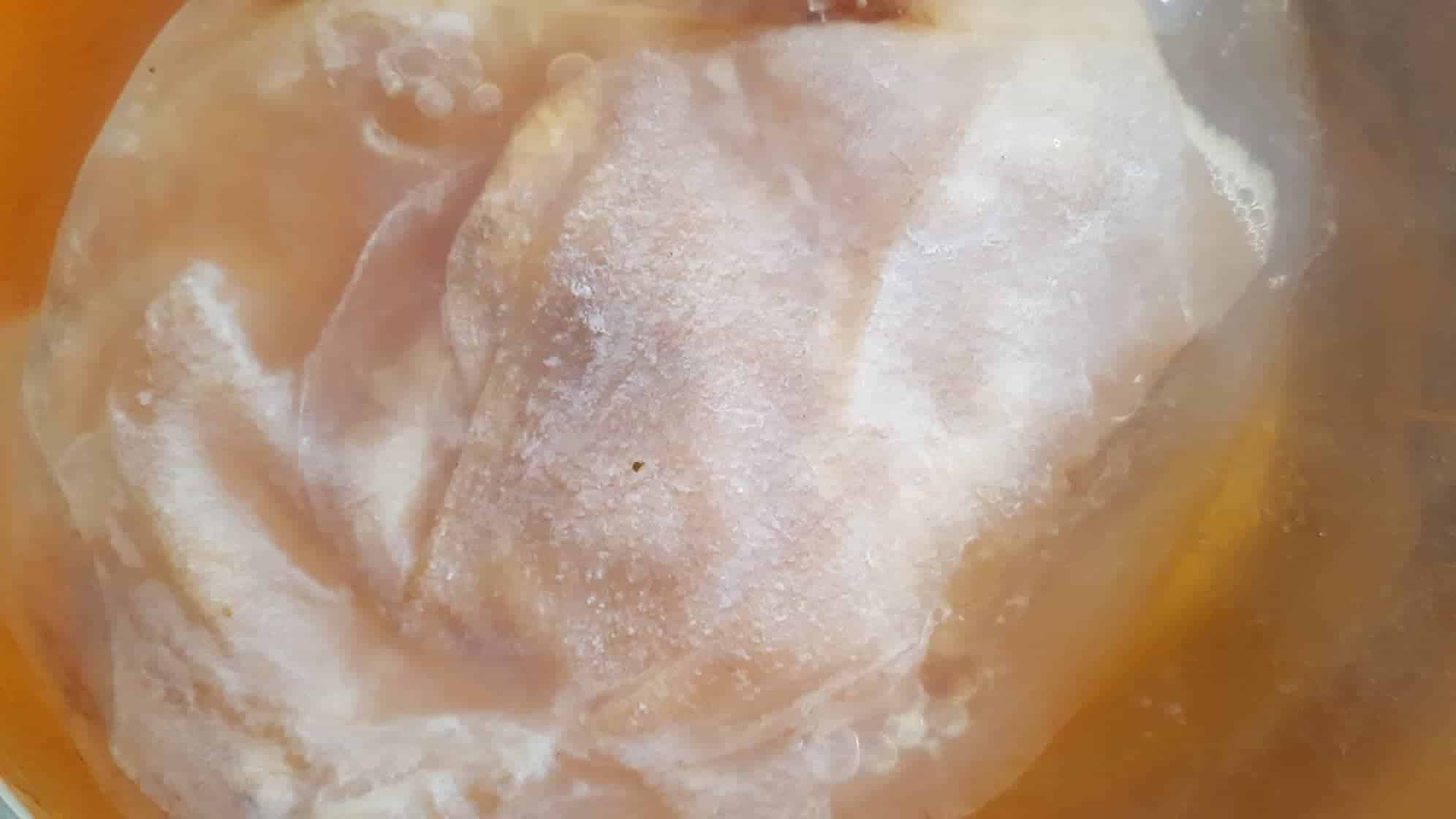 One month ago, I’ve started cultivating the “Kombucha mushroom” at home. It is very interesting to have this Japanese tea fungus, which was a privilege only in the royal courts long ago, it in my home.

I didn’t know if it will be beneficial for my health or not. So I did my research, and then I started drinking it. This is my conclusion after my two months of experience growing and consuming the Kombucha mushroom and tea.

What are Kombucha mushroom and Kombucha tea?

The truth is that Kombucha mushroom as people call it is not a mushroom. It is a SCOBY, which means Symbiotic Culture Of Bacteria and Yeast.

The culture looks like pancakes, and it is drowned in a large glass container (like a big jar) filled with tea. This tea can be green, black, forest tea, or whatever you prefer, except fruit tea.

This weird culture that floats in the jar is home for bacteria and yeast. They transform the ordinary tea into strange, a little bit alcoholic, fizzy drink, similar to beer and wine with fragmentation. That strange drink is called Kombucha tea. 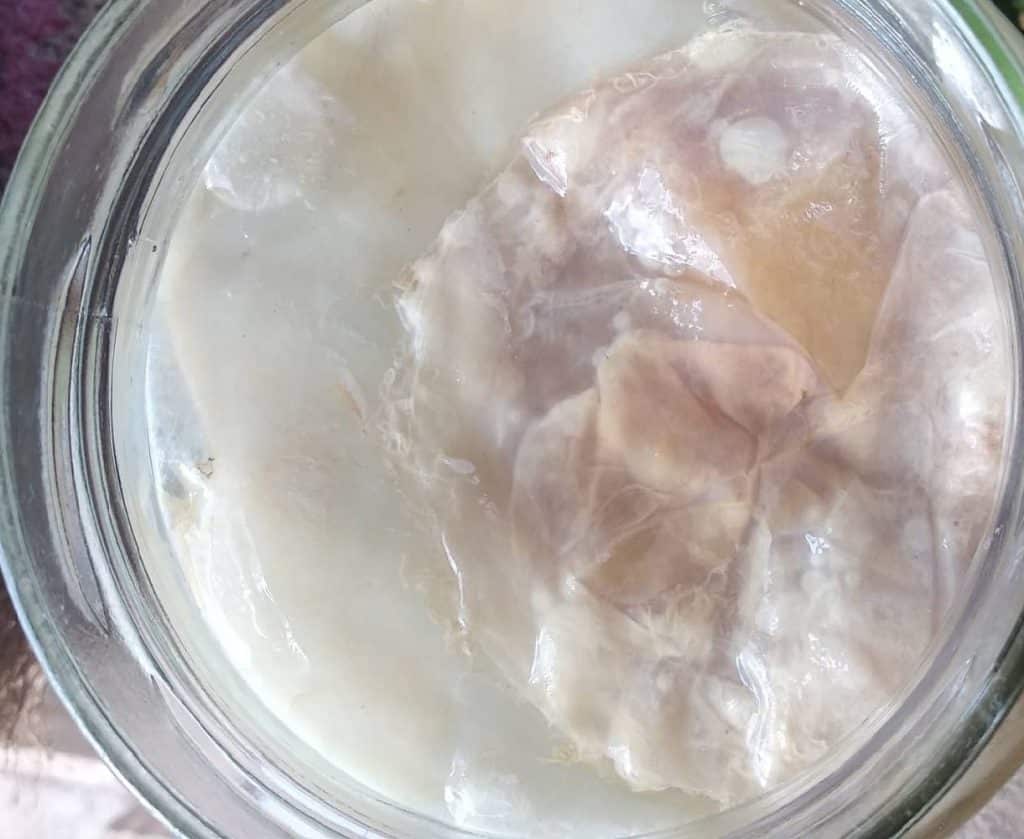 There are a few claims about where Kombucha came from. Someones say east Europe, others Russia but no one can tell for sure.

I have a favorite story that claims that kombucha comes from Japan circa 415-year a.d.
In ancient times, kombucha was a privilege only in the royal courts and was treated as a huge secret in Japan.

Thousands of years ago, the Japanese Emperor invited the Chinese Emperor to visit him.
When the stay was over, the host wanted to give his guest something very valuable as a gift. Of course, this gift was the kombucha.

There is mother SCOBY and baby SCOBY. A friend gave me a baby SCOBY (which eventually will become the mother) as a gift. That baby was given to me in a small jar with little liquid (kombucha tea) in it.

To prepare a new home for the baby I put seven glasses of water to boil. The water reached 80°C, then I put half glass sugar and mixed until it dissolved (the sugar must dissolve completely.)

Then I added homemade forest tea and left it to cool off. Some people prefer to use green or black tea and that’s perfectly fine. Truth be told, green tea doesn’t work for me, so that’s why I use forest tea.

The glass jar that you’ll transfer the baby in it must be sterilized and clean. You do not use steel accessories through the process, only glass, wooden and plastic.

When the tea has cooled, I transfer it to a bigger glass jar and add the baby with its liquid.

I cover the jar it with gauze (cloth will work too) and tighten it with a rubber band.
Then, I store it at room temperature. It must not be exposed to sunlight.

The fermentation process lasts 10 to 14 days. The first time may last longer if the jar is bigger, but that’s not a problem. I extract the tea in 12 days because I prefer that flavor.

After the first or maybe the second extraction, that baby became a mother and it starts to make a new baby on the surface. When the new baby is ready to be removed, remove it from the jar. If it’s united with the mother, try to gently remove it. If you can’t, leave it be until the next extraction.

You can put it in another jar and start the whole procedure all over again (then you’ll have two jars and more kombucha tea). You can even gift it to someone. And yes, you can eat it. It is very healthy and will not harm you.

Don’t forget to send her positive energy, it will help a lot for a better brew and better tea. 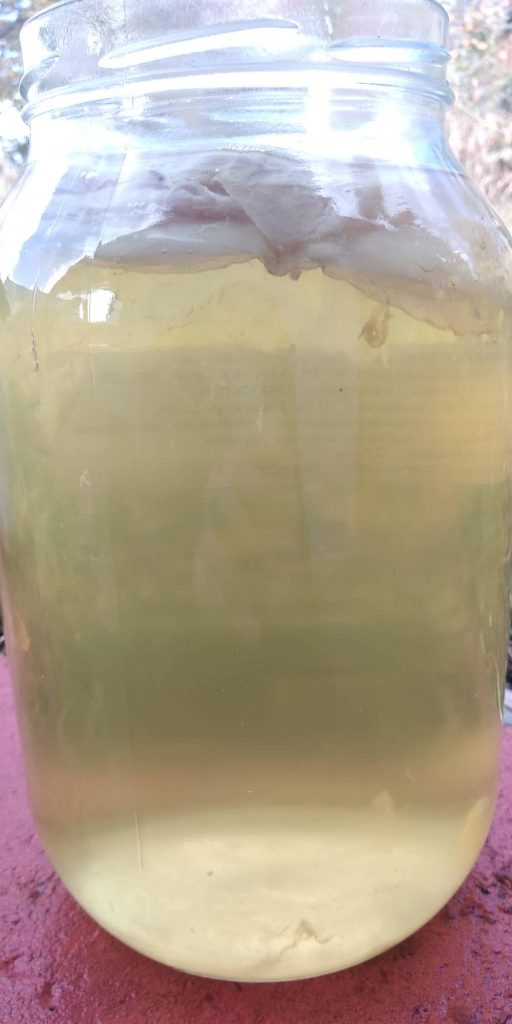 This is a new, interesting, recipe that includes fruit to the tea and makes it more delicious.

That’s all, enjoy your drink.

The Kombucha must be prepared in a sterilized and clean environment. If you smell a strange smell, you need to throw it away, because it contains “bad bacteria”.

If you notice mold-like traces, you should immediately throw the fungus and the liquid away.

As I mentioned above, use a wooden or plastic spoon, but don’t forget to remove the rings from your hands when touching it.

If brewing is difficult for you, Kombucha tea now is produced by many companies around the world. Chances are you can buy it in a store or online.

What Vitamins and Health Benefits Does the Kombucha Tea Has?

First of all, kombucha tea must be prepared properly. Only after that, you can count on the vitamins and benefits.

There’s lots of proof and research on the benefits of kombucha tea. All you need is to try it on your own to feel them.

Here are some of the vitamins and benefits of kombucha tea: 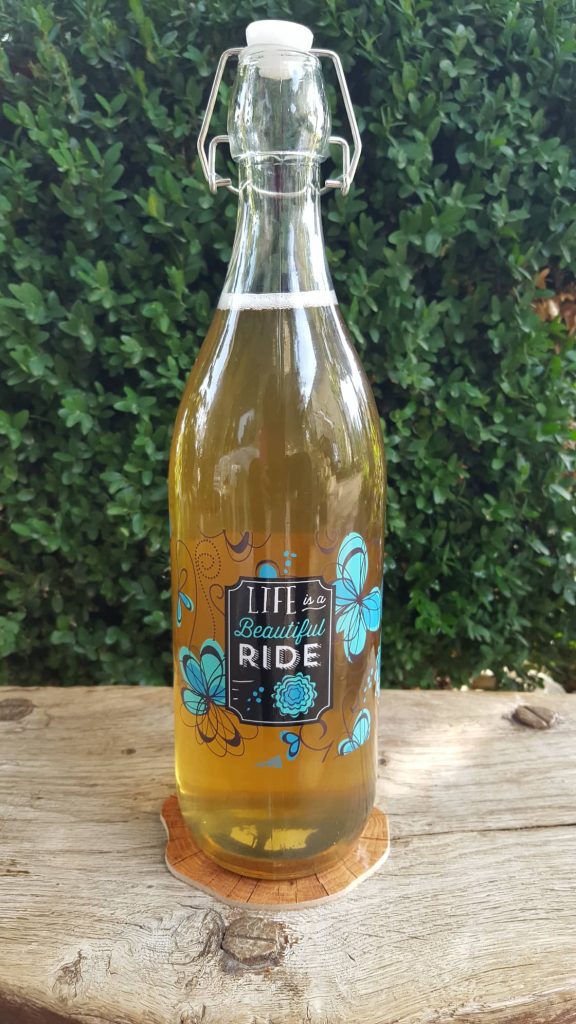 Does Kombucha Tea Side Effects?

The short answer is yes, kombucha tea has side effects, but not a lot.

Kombucha abounds in organic acids. This means it might lead to reactions in acid-sensitive individuals. It can also cause yellow skin, yeast infections, stomach problems, and headaches.

Has Anyone Died Because of Kombucha Tea?

There is one case of death that’s alleged because of kombucha, but it was never proven that the tea caused it.

Can children also consume it?

Kombucha tea is not recommended for children under 1 year of age, as it contains bacteria and enzymes that could be difficult for a child’s digestive system to form.

And don’t worry you can’t get drunk,
Unless you drink too much of it because it contains a very low volume of alcohol.

I recommend trying it. If you feel somehow strange, or not feel well then stop.

What does Science say about Kombucha Mushroom Tea?

Well, about the science part, Kombucha you can read the studies onUS National Library of Medicine and National Institutes of Health a study made by PubMed

How Much Kombucha Tea I drink in one day?

I started with 1 cup a day. After a while, I started increasing the dose, and now I drink 1 whole glass of tea.

I like it. My boyfriend likes it too. No side effects for now. That little volume of alcohol works for me and I feel really good.

It is interesting how it works and you can use it also as a refreshing drink.