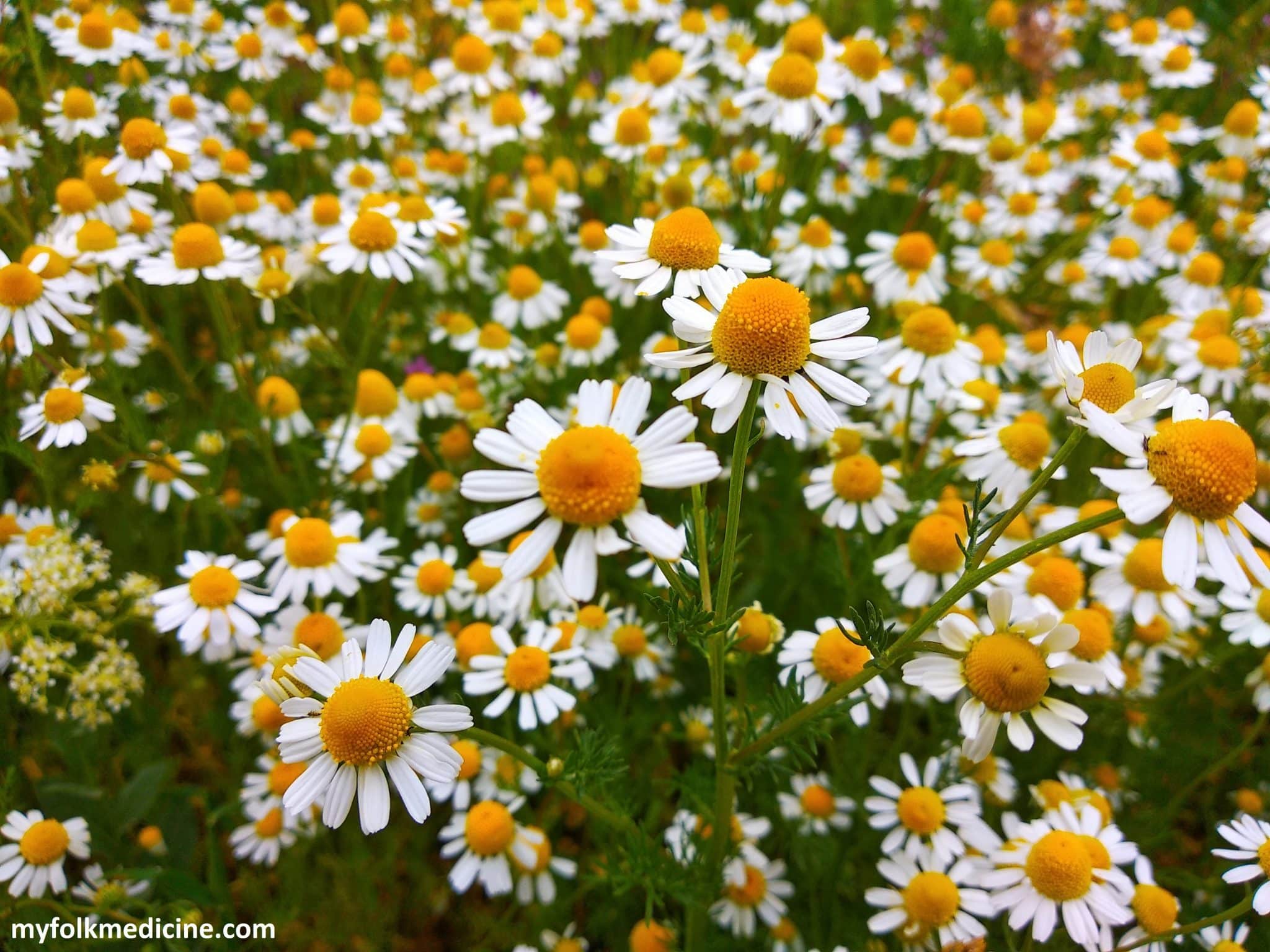 Its the low, yellow-flowered herb with white petals that everyone knows. There is no pharmacy in which there is no tea or other herbal product made from this herb. When I decided to write about this herb, I actually realized that it was disappearing. Or, at least in my region.

By chamomile, I don’t mean the one cultivated by people who create the conditions for its survival, but the wild one.

If 20 years ago all sideroads were in white yellow, today it’s only a single meadow. Whether the reason for this is the global climate change or some other factor, I honestly do not know yet. But I can say that whatever happens, this beautiful herb to disappear is not good.

The medicinal ingredients of this herb are in the blue essential oils. They are obtained by distillation and used in pharmaceuticals in many products.

Tea, oil, and lotion have different health benefits. Folk medicine is using them for almost 5,000 years. The side effects are minimal, because the herbs works slowly without harming human health.

Chamomile’s name is used for some herbs spices from the Asteraceae family. The best known and known for healing are German (Matricaria recutita) and Romanian chamomile (Chamaemelum Nobile.)

Where Do the Healing Properties of Chamomile Come From?

I mentioned earlier the blue essential oil. That’s the reason some people call it blue chamomile. In fact, this oil is primarily violet. In the plant, it is present from 0.24% to 1.9%. Under the action of distilling the stem, the ingredient Azulene appears, which has a dark blue color.

Azulene is the main healing ingredient of oil and chamomile. The darker blue color means higher healing properties. This color can sometimes be deep green. And, after storage, it turns dark yellow but does not lose its properties.

The Azulene evaporates very quickly. So, when making tea, it is important that it is freshly prepared and covered from above. This prevents beneficial ingredients to evaporate. And the oil and other products need to be well-sealed and stored in a dark and cool place.

The shade of blue oil or the amount of Azulene also depends on where the herb grows and how.

Wild chamomile that grows in nature, more precisely in the mountains, has more beneficial properties. This is so because the highlands are most suitable for these plants. If it’s grown by humans, the healing properties depend on how and what is used in their cultivation.

How Does It Look Like and Where Can You Find It?

Chamomile is a small herb that lasts only a year and usually grows from 10-30 cm. But, it can sometimes reach up to 60 cm in height. It has a white-yellow color flower and smooth, branched, and erect stem.

It flowers 2-3 times a year from early spring to late summer. And, it has a strong aromatic scent.

Chamomile succeeds in strange and interesting places. They grow where grain or similar crops were previously growing, but due to a disaster such as hail or a flood, the water remained on that soil. These conditions that contributed to the destruction of that plantation created the perfect conditions for chamomile.

This strong clay soil that does not absorb a lot of water is very suitable for chamomile. Usually, these are not whole meadows or fields but only parts of them.

Chamomile flowers contain flavonoids, terpenoids, and chamazulene. They are very useful but also unstable. They are best kept so as not to lose their properties in an alcoholic tincture.

When prepared as a tea, it is a great digestive relaxant. It can help with treating diarrhea, nausea and vomiting, anorexia, flatulence, sickness, fevers in children, colic, uterine tonic in women, stomach cramps, back pain and so much more.

When Chamomile is in the form of essential oil, it’s exceptionally useful as a sedative to calm nerves, treatment of hysteria, reducing anxiety, beating insomnia, etc.

I’ve listed the benefits in this section only because the following two blogs I will explain in detail the benefits of tea and essential oil. More about this you can read in this review.

It’s best to harvest chamomile in late April and early May. This sometimes might be sooner or later, depending on whether the spring started later or earlier, and whether there were April rains.

Although it blooms throughout the summer, only the first bloom is good for harvesting because it is the purest. It is usually hand-picked for home use. The industry has special tools and machines for that purpose though.

Chamomile dries immediately after harvesting. It should be done in a dry place where there is a burst of air and it is not exposed directly to the sun.

The drying temperature must not exceed 45 ° C, as all the essential ingredients of chamomile and blue oil are lost.

Store pre-dried chamomile in a non-transparent container or dark-paper applied container. This is recommended because direct sunlight destroys the blue oil.

It should also be stored in a dry place, as moisture is fatal for dried herbs.

If you would like to read more about how to properly store and pack herbs, you can read How to Pack and Store Medical Herbs?

The use of chamomile can aggravate pollen allergy. It also may interact with other prescribed medicines and herbal products.

It can also cause interaction with NSAIDs or non-steroidal anti-inflammatory drugs and aspirin.

There are limited studies that have shown that people who have had ovary, endometriosis, uterine fibroids, and breast cancer should not use chamomile. Still, there’s the need for more research to confirm this.

Do not use Romanian chamomile during pregnancy. It causes uterine contractions and can lead to miscarriage.

Chamomile is declared a generally safe herb for consumption.

This little herb with a white-yellow flower that was abounding in the past and not so much today has great benefits for human health.

It makes the most consumed tea numbering in the millions of cups a day globally. The most famous varieties of chamomile are German and Romanian. They are also the most commonly used for the production of herbal chamomile products.

The tea has anti-inflammatory, anti-oxidant effects and is used for various infections and diseases. Essential oil is used for aromatherapy and has a calming effect.

Beware of consuming chamomile if you are taking aspirin, have pollen allergies, or are pregnant. Otherwise, you can only become healthier with nothing to lose.