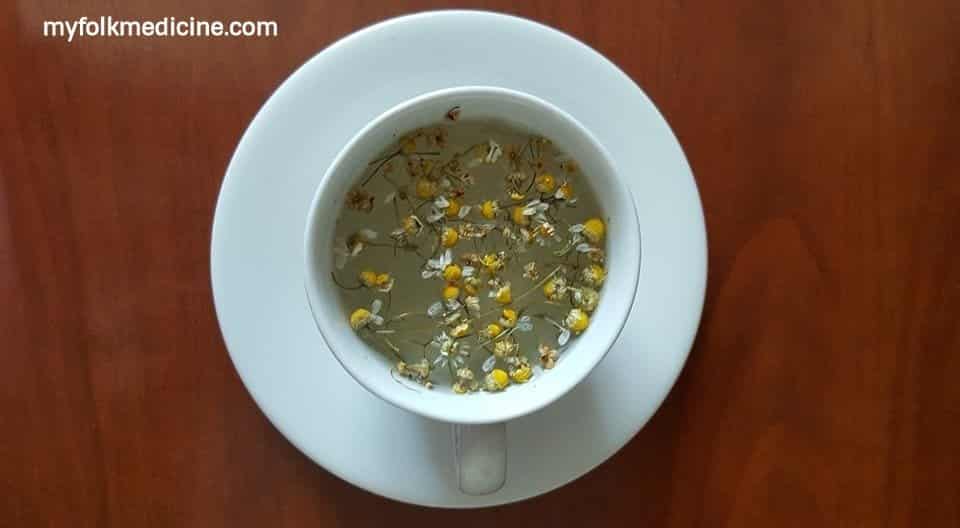 Chamomile tea is one of the most used herbal teas. Its benefits derive from its anti-inflammatory, antioxidant properties. It also contains apigenin and flavonoids. These help with insomnia, some cancers, heart disease, blood sugar. There are also other benefits that I will explain in more detail.

Tea is made from dried chamomile flowers. I usually mix it with basil tea, thyme or elderberry flower tea if I’m cold or have the flu. When you mix it with the first two types of tea, you get a calming mix. You can drink it before bedtime and it will help you fall asleep easier. And if you add in elderberry, then you get a mix that will relax you during a cold or flu and help you beat it.

When preparing the tea, make sure that the water temperature does not exceed 80 degrees Celsius. This temperature will destroy all useful ingredients. After submerging it in water, cover it from above to prevent evaporation of the blue essential oil.

People in traditional medicine have used it for many health problems. But, for the following benefits, there are scientific studies.

Helps With Stomach Health and Digestion

Traditional medicine uses chamomile tea for stomach problems like gas and nausea. In fact, it is not accidental. Its anti-inflammatory properties have a calming effect on the stomach.

Reduces the risk of different gastrointestinal problems with improving digestion.

There’s a study about the antioxidant and anti-diarrhea activities of chamomile. It showed that the extract, due to its anti-inflammatory properties, works against diarrhea. This study was on mice, for humans, there are not enough studies.

Another study about how herbal remedies work on stomach ulcer chamomile has shown a positive results. The results were that chamomile reduces the acidity in the stomach. This means that it decreases the chance of the bacterium contributing to the formation of an ulcer.

Can Improve Sleeping and Reduce Insomnia

This study tested which herbal medicines can beat insomnia. Thanks to an antioxidant called apigenin, chamomile showed a great result. It positively affected chronic inability to sleep and insomnia.

There is another study that explores the same topic. This time, one group of people took chamomile extract twice a day for 28 days. After that period, they fell asleep 15 minutes faster and were 1/3 less awake at night than the placebo group.

A chamomile tea study on postnatal woman with depression showed that same result. It provided better quality sleep in women who drank tea than the other group.

If you have trouble with sleeping, make this tea. You can also mix it with basil or thyme.

It is Good for Heart Health

Antioxidants called flavonoids play an important role in cholesterol levels. They also help manage blood pressure. Both are major factors for heart health. These antioxidants are abundant in chamomile. Their connection with cardiovascular disease was the subject of this study.

Results of a study about how chamomile tea affects type 2 diabetes have shown that it has a positive effect on it. In the study of 64 subjects who had diabetes, they took chamomile tea at each meal. After a certain period of time, these respondents reported a significant improvement. This included LDL cholesterol levels, total cholesterol, and triglyceride. Others who took only water didn’t show these results.

There’s a lack of studies to further prove this connection though. Still, you can always choose chamomile tea if you have any of these problems. You can even take it if want to protect your heart health. You really have nothing to lose.

It can Prevent or Help Fight Certain Types of Cancer

The antioxidant apigenin that I mentioned before has a positive effect on cancer cells. There’s a scientific study that showed apigenin as a promising molecule against digestive tract, skin, prostate, breast and uterus cancer.

Another study found that respondents who consumed chamomile tea 2-6 times a week had a great improvement. They reduced their risk of developing thyroid cancer, unlike those who didn’t drink it.

The occurrence of cancer depends on many factors. Chamomile works against these factors, but still, there’s the lack of studies to make this a fact.

Insulin is a hormone that produces the pancreas to push sugar out of the body. Pancreatic health is very important for general health. Its cells get damaged as a result of chronically elevated blood sugar levels. Chamomile actually prevents these cells from destruction. It maintains the health of pancreas and blood sugar levels with its anti-inflammatory properties.

This is also shown by a study in which 64 diabetics consumed chamomile tea with each meal for 8 weeks. Their blood sugar levels were lower than those who consumed only water.

In animal studies, the effect was like that of humans. Chamomile helps lower and keep low blood sugar levels immediately after consummation.

May Reduce Menstrual Cramps and Pain

This study examines how chamomile tea acts on menstrual cramps and mood during that period. It showed very positive results.

80 female students in Iran took chamomile tea a week before the cycle and 5 days during it for 3 months.

They have found that chamomile tea is an effective treatment for pain and mood swings during the cycle.

May Prevent Bone Loss and Osteoporosis

A lot of times, osteoporosis appears in postmenopausal women. This is perhaps due to the effect of the lack of estrogen. The result is a loss of bone density that can cause stooped posture and broken bones

This study needs further investigation, but still showed promising results. Chamomile tea increased bone density and showed an anti-estrogenic effect. Both are very helpful for preventing and helping people with that condition.

Inflammation is the body’s defense system against infections. The problem arises when it is there for a long time. It can cause diseases like autoimmune disorders, gastrointestinal pain, arthritis, hemorrhoids, depression.

Chamomile with its anti-inflammatory properties can prevent this from happening.

It is well known that chamomile is a part of many skin care creams and oils. Many studies show that it has a great effect on skin health by reducing inflammation.

Drinking chamomile tea can also contribute to the health and beauty of the skin, but in a slower way.

Protects Against Colds and Sore Throat

This type of tea is the go-to beverage during colds and sore throats. It can help with these conditions and boost immunity to prevent them.

Not enough studies are done on this. Still, it does not mean that it is incorrect, but there aren’t many studies to prove it.

It Can be Helpful for Anxiety and Depression

For these health problems, chamomile has shown the most positive results. They are most prominent in the form of aromatherapy and supplements. Most studies tackle these forms of chamomile usage. Most studies are about them, but that doesn’t mean that tea doesn’t have the same effects.

Besides helping with sleep and insomnia, chamomile tea can help relieve the symptoms of anxiety and depression.

Chamomile is generally a safe herb, but you should be careful about the following things:

In winter you can make a tea from this beautiful yellow-white flowers. Not only will it warm you up, but it will also calm you down at the end of a hard day.

It improves sleep quality and allows you to fall into a dream faster. You can make a mix with thyme or basil tea for a better effect.

Chamomile has anti-inflammatory properties that help reduce various inflammations. This includes inflammation in the stomach, skin, and osteoporosis.

It should not be consumed by people who are allergic to pollen or daisy family plants. They are likely to be allergic to chamomile as well.

If you have it in your place, wait until spring and pick out as many as you can. It begins to disappear more and more from year to year.

I recommend you to read my previous blog Chamomile – What Makes It Healthy? and Chamomile Oil Health Benefits and Uses